Demystifying the ‘magic’ of the Pultec EQ

We love classic analog gear! In previous blog articles, we already covered some of the finest like the Binson Echorec, SSL EQ’s, the Mini Moog, VOX AC30 and the NEVE 2254. They all add character to your sound, something intangible, a little bit of mystery. Some would even call it magic. But there’s hardly any piece of gear that is more revered to about its magic, than the Pultec EQ. It’s such an extraordinary piece of gear that people love putting it on their master bus, even without any EQ enabled. And if you ask someone why only a few would have an answer to this question. So we felt it was time to demystify this unique device!

But first, let’s start with a bit of history
You see, the first Pultec (EQP-1) was already introduced in 1951 by Pulse Techniques, a company formed by Ollie Summerland and Gene Shank in Teaneck, New Jersey, USA. Summerland and Shank hand-built the first units and through many iterations, the basic design remained through the late 70’s/early 80’s. The build quality and design of all the Pultec products was unparalleled and each and every Pultec was handmade to order.

In the meantime, the Pultec EQP-1A was very well received, probably due to the fact that it was the first passive program equalizer on the market. They were in high demand by radio stations, where they were installed to “add that ‘final touch’ to the balance of good programme material and to greatly improve the quality of programme material previously recorded on equipment of inferior quality”, as the original manual boasted. But what éxactly does this Pultec equalizer do that makes it so special, we can hear you asking. Well, let’s dive into that!

Overall design
The Pultec EQP-1 is a full passive 3U all-valve equalizer and therefore needs an additional amplifier circuit. This is needed to restore the signal level that is reduced when an audio signal is fed into the unit, making the EQP-1A a no-loss passive equalizer. This means that the signal level remains the same regardless of whether EQ is switched in or out, which is very useful when comparing a flat signal to an equalized one. But more than that, it means the unit first drops the level and then boosts it again by using a valve design which ultimately adds harmonic distortion that in most cases adds depth to the sound. We’ll explain this more in the next section.

The low-frequency section of the EQP-1A is a shelving EQ, providing four selectable frequency bands at 20, 30, 60 and 100Hz. These frequencies can be boosted to a maximum of 13.5dB and attenuated (cut) by 17.5dB.

The Pultec high-frequency section features a boost-peaking EQ and offers seven centre frequencies – at 3, 4, 5, 8, 10, 12 and 16 kHz – which can be boosted by up to 18 dB, while a Bandwidth control alters the Q of the equalization curve from sharp to broad. The high frequencies can also be cut at 5, 10 and 20 kHz. This is a shelf-cut with up to 16 dB of attenuation. 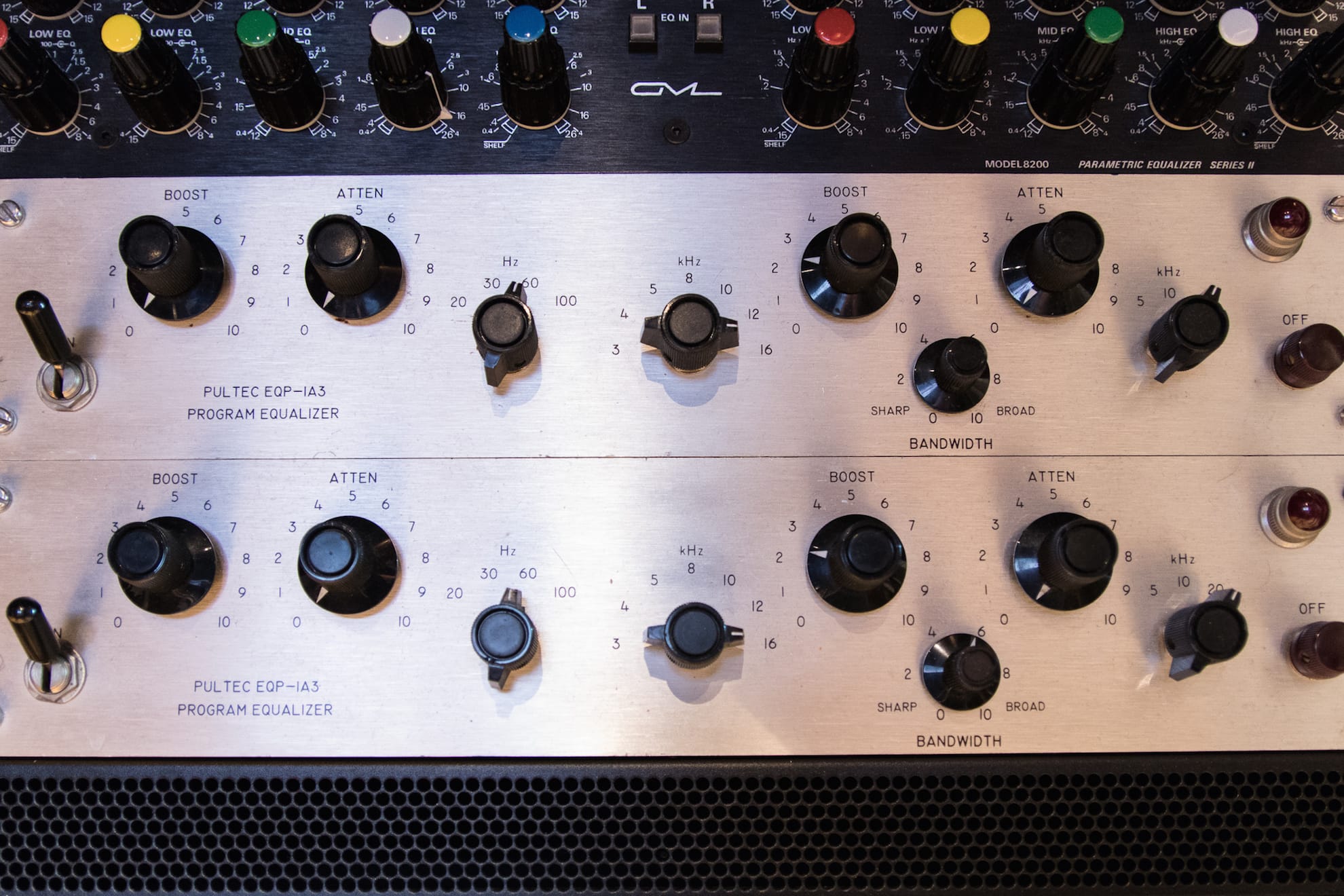 Magic while no EQ
As we said before, many engineers have found that audio can be enhanced simply by passing the signal through the Pultec, with the EQ switched out. In order to make up for the lost gain, the Pultec uses a simple dual‑valve amplifier stage that is, unusually, fully balanced throughout and operates in a classic push‑pull arrangement. Both valves are dual triodes, the two halves of each being used in the push‑pull mode to handle each half of the balanced audio through each gain stage. The input section is built around an ECC83 (12AX7), while the output transformer is driven by an ECC82 (12AU7). Negative feedback is derived from an extra secondary winding on the output transformer — so that transformer distortion and some output loading effects are automatically compensated.

“In regards to the EQP-1, the term ‘magical’ seems to be appropriate. There’s something about a Pultec EQP-1 that enhances anything you run through it, even if you don’t apply any EQ. There’s a glow that happens within the tubes and transformers that add some weight in the low end and opens up the top.”
–Vintage King

Boost and cut simultaneously
In the documentation supplied with the hardware version of the EQP-1A, it is recommended that both Boost and Attenuation not be applied simultaneously to the low frequencies because, in theory, they would cancel each other out. In actual use, however, the Boost control has slightly higher gain than the Attenuation has cut, and the frequencies they affect are slightly different. The EQ curve that results when boost and attenuation are simultaneously applied to the low shelf is difficult to describe but very cool: Perhaps the sonic equivalent of a subtle low-midrange scoop, which can add clarity. A great trick for kick drums and bass instruments.

Sound engineers long ago discovered that interesting (and useful) equalization curves could be achieved by simultaneously boosting and cutting at the same time, as the boost and cut frequencies overlap. This trick has become known as the ‘low-end trick’. On a bass drum, for example, if 30Hz is simultaneously boosted and cut, the curve created gives a boost at 80Hz with a dip at around 200 Hz – a very pleasing curve on some bass drums. The sound can be sweetened further using the high-frequency controls.

Original Pultecs are now highly sought-after, with mint examples changing hands for around £5,000. Fortunately for those without that kind of cash at their disposal, the design has been re-created by a number of manufacturers over the years and now EQP-1A clones are available from companies such as Cartec, Tube-Tech and Manley.
Obviously, the EQP-1A was embraced by many of the top recording studios, especially in the USA, and it can be heard on literally thousands of recordings made over the past 60 years. Tamla Motown owned several units and used them for everything, from tracking individual instruments and voices to equalizing the final mix at the mastering stage. Motown engineers often employed the ‘low-end trick’ on backing tracks, carving out some midrange frequencies and creating space for the lead vocal to sit nicely in the mix.

Quoting Vintage King: “It’s crazy to think that a piece of equipment with such simple controls could change the face of the recording industry. 60 years on and Pultec designed gear is still being used by many of today’s top recording and mixing engineers, whether it be original, reproduction or of the plug-in variety.” We wholeheartedly agree on that, and therefore cherish our two original Pultec EQ’s in Studio 1, over here in Amsterdam. Feel free to drop by one day to have a listen and get a glimpse of their magic.

That was an awesome take, now can you do one more?
Meet us at EMME 2018
Download Prospectus
Download the prospectus for our course: Advanced Diploma in Music Production and Sound Engineering.
Categories
Recent posts
22/05/2020
Our must-watch Music Documentaries overview
Read article
24/04/2020
Telling a Story through Music.. with Graduate Rudy Mackay
Read article
03/02/2020
Emotion in Music (Part II), a practical approach
Read article
This site uses analytical cookies to improve your experience on our website. You can read more about our how we use cookies in our privacy policy. Please accept to confirm we have your permission to place additional tracking cookies:YesNo