The Global Graduation Ceremony in London 2019

It’s one of the highlights of the year: the annual Global Graduation Ceremony in London! A special moment where students from Paris, Melbourne, Berlin, London, Frankfurt and Amsterdam come together to celebrate their hard work and successful completion of the Advanced Diploma in Music Production and Sound Engineering.

It is a truly unique experience to study at Abbey Road Institute. And it’s almost inevitable to have the diploma ceremony at the holy ground of music, where the fundamentals of our curriculum are founded upon; Abbey Road Studios, home of the biggest names in music, where they recorded their albums and left their musical footprint in history.

Abbey Road Studios welcomed over 400 guests for the Official Ceremony and Celebration. Supported by parents & family and friends, students from the six Abbey Road Institute locations gathered at the studios to receive their diploma. Gaya Tideman, one of the fresh new graduates from the Amsterdam full-time group, shares her experience in this blog. 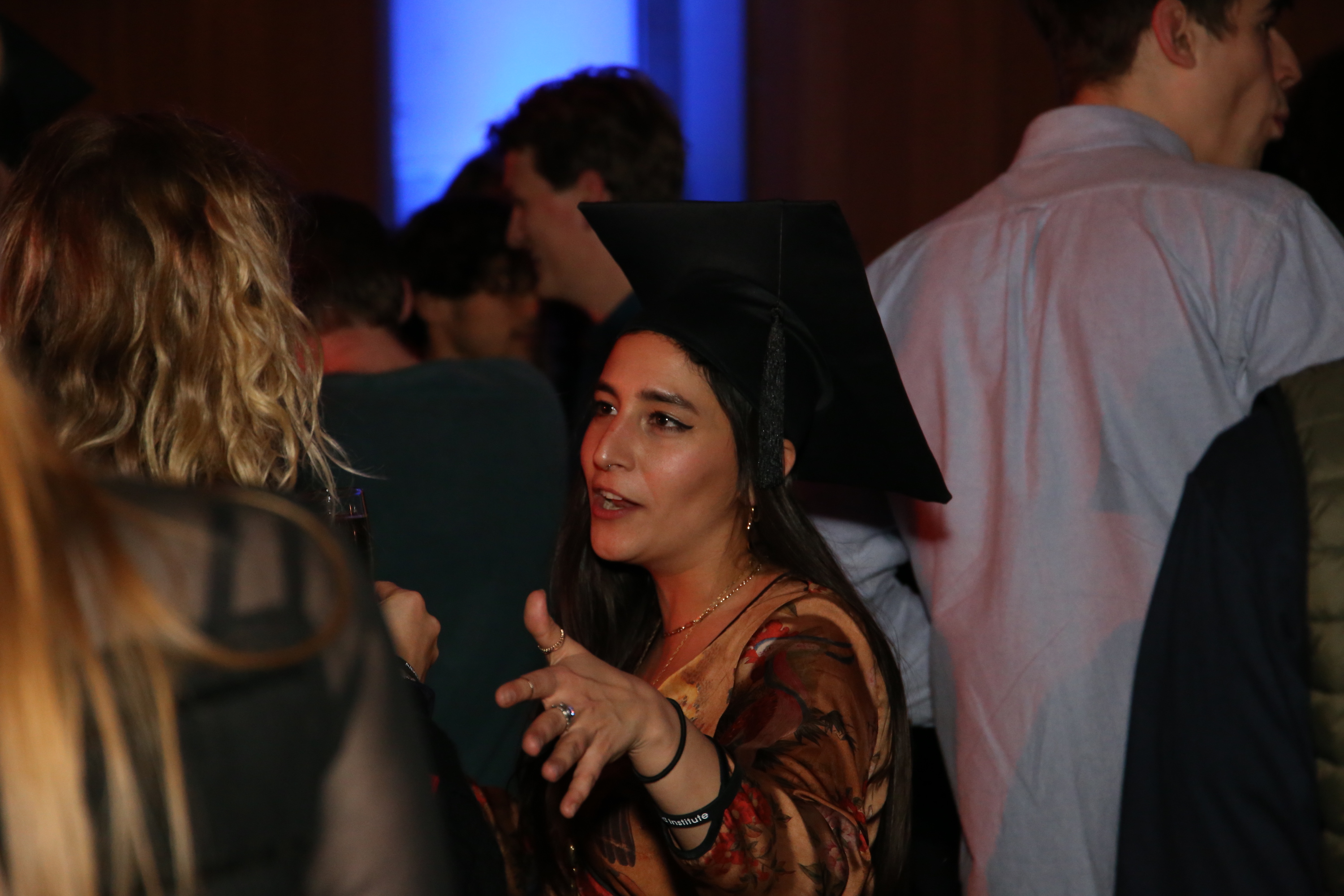 After a very peaceful trip to London, everything led up to the Graduation Ceremony at Abbey Road Studios. I reconnected with my old life in London, where I previously did my Bachelor in Music at LCCM, and it almost felt like me coming full circle. While meeting my old musician friends and catching up with them, I noticed how hard it is to sustain yourself as a musician. Many of my friends moved on, but the few that stayed in music spoke about how much they needed navigation and direction in the recording world. Which is quite interesting.

One of the first things we were taught about engineering and production at Abbey Road Institute Amsterdam is that it’s a people business. You’re supporting and holding space for the feelings of musicians every single day. I really enjoy this process, since I’m a people person and a songwriter myself, and I really have to connect with their story. Besides that, I’ve learned to connect the dots between emotion and music much better. I’m now approaching things with a whole new skillset and realised that I’ve learned so much in just one year at the Institute.

Day of the Graduation

On the day of the ceremony I was a bit nervous. It felt like I was reaching a new stage in life, the point moving from study life into the professional world. At the same time, I was really excited to meet everyone again and meet “the bigger family” that made Abbey Road what it is today.

The moment I approached the Studios, I was in complete awe. Especially with my dad because he introduced me to the Beatles when I was younger. It was special coming back to a studio space, where I was able to share an experience with my dad of connecting his world and generation with mine. A very special experience for us both. I am half Indian, half Dutch and grew up in Pune, India and was steeped in Indian culture. I came to Amsterdam to discover more of my father’s side of the family and finishing at Abbey Road Studios together, made the circle round.

Walking up the steps

For me, it’s all about the experience, and that moment of walking up the stairs, walking into the studio made it real for me. It was like accessing a world that was utterly mysterious to me. A sense of awe and wonder took over when I crossed that threshold from outside to inside. The illusion of Abbey Road wasn’t shattered but enhanced. I had a sense of sincere gratitude when I was able to walk in studio 2 and realized I was standing in a legendary place where both magic and history was created. That this world is bigger than I initially thought. The knowledge of recording technology combined with production techniques came from that place. Bands and artist that inspired me as an artist/engineer/producer recorded their albums there; Pink Floyd, The Beatles (of course!), Alicia Keys, John Lennon (with his ‘imagine’ album), Kate Bush, Paolo Nutini, Frank Ocean, Muse, Radiohead, A.R. Rahman (Indian music director, singer and music producer), Amy Winehouse (she is my idol!) and the jazz classics from Ella Fitzgerald (I love those!)

It was only 2 months ago that we had our last lecture in Amsterdam, but it felt like ages. So seeing the Amsterdam Team – Jasper, Robin & Milou – and the Amsterdam teachers were instantly comforting, it was like falling back in the old family vibe. These people have been there with us every step of the way, with the support and love, making us feel like we are still and always will be part of the Institute. This is really important to me. Instant connection with my fellow students, felt like meeting family. Our class was really proud and supportive of each other. We all recognised at that moment how privileged and fantastic the opportunity was to be there all together. 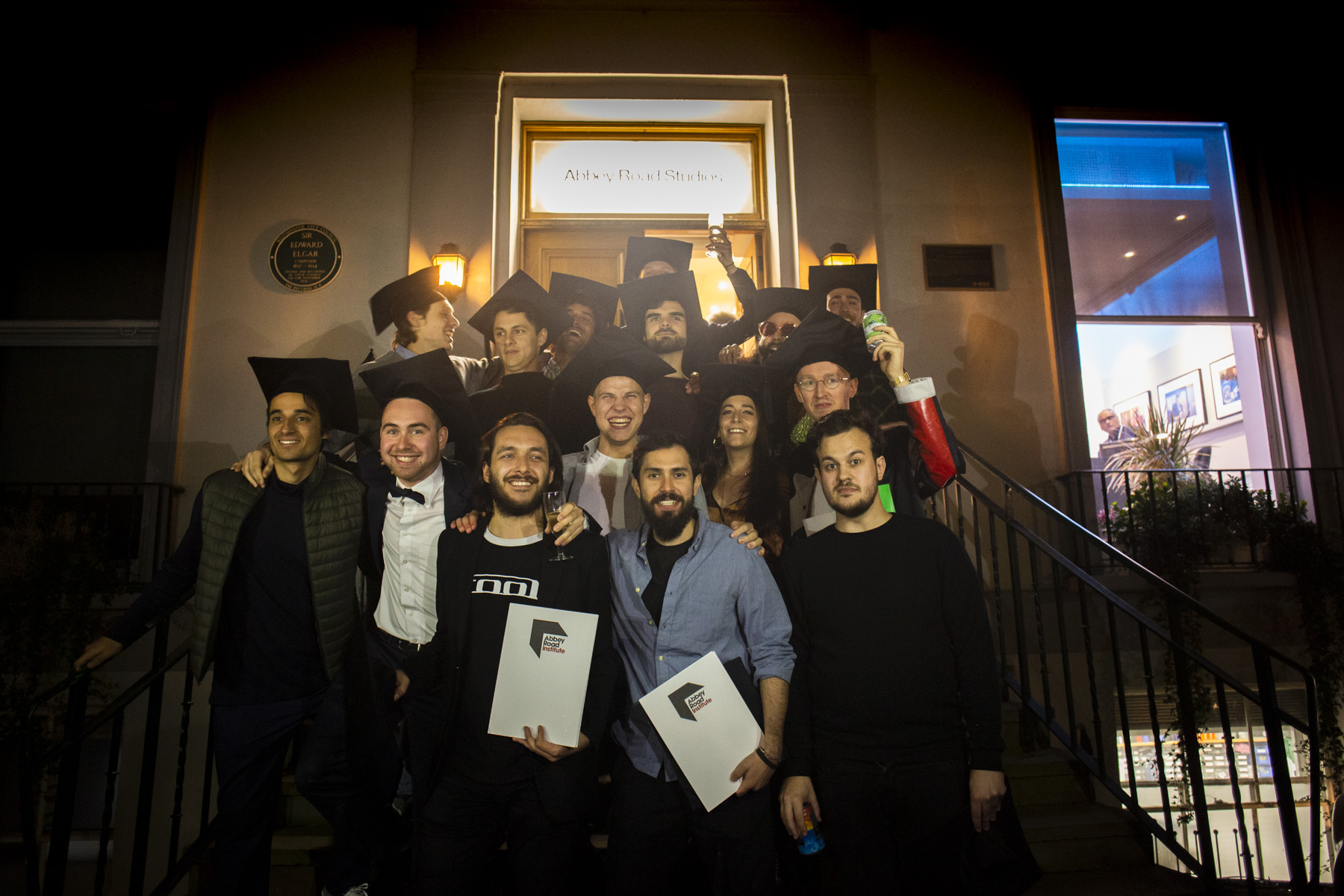 The Amsterdam graduates of the full-time class of ’19.

I felt blessed with a very talented batch of fellow students, and it was an inspiration to push each other. It was an environment of healthy competition and a very international one too! Out of the 18 students that made up our class, only 2 were from Holland. The rest was from all over the world. This created a connection and acceptance of different cultures. Everyone opened up and
I was so touched when I recognised so many insecurities that I held alone but then saw that in the group everyone was having and sharing the same. We all realised that we left our family and friends in other countries, so we became a family for one another, we were each other’s support system. I freaking love them no matter what.

The ceremony in Studio 2

The official ceremony started with a warm welcome from Luca Barassi, CEO of Abbey Road Institute, followed by the Head of Programme, Carlos Lellis, giving a heartwarming speech. He spoke about how music does not only touch you as a feeling but actually as the physical experience of music and sound pushing against your skin, “physically” touching you and a part of history touching you as well. My parents were really struck by his speech too. It makes you believe in your craft, even more, bridging the gap between technology and emotion. 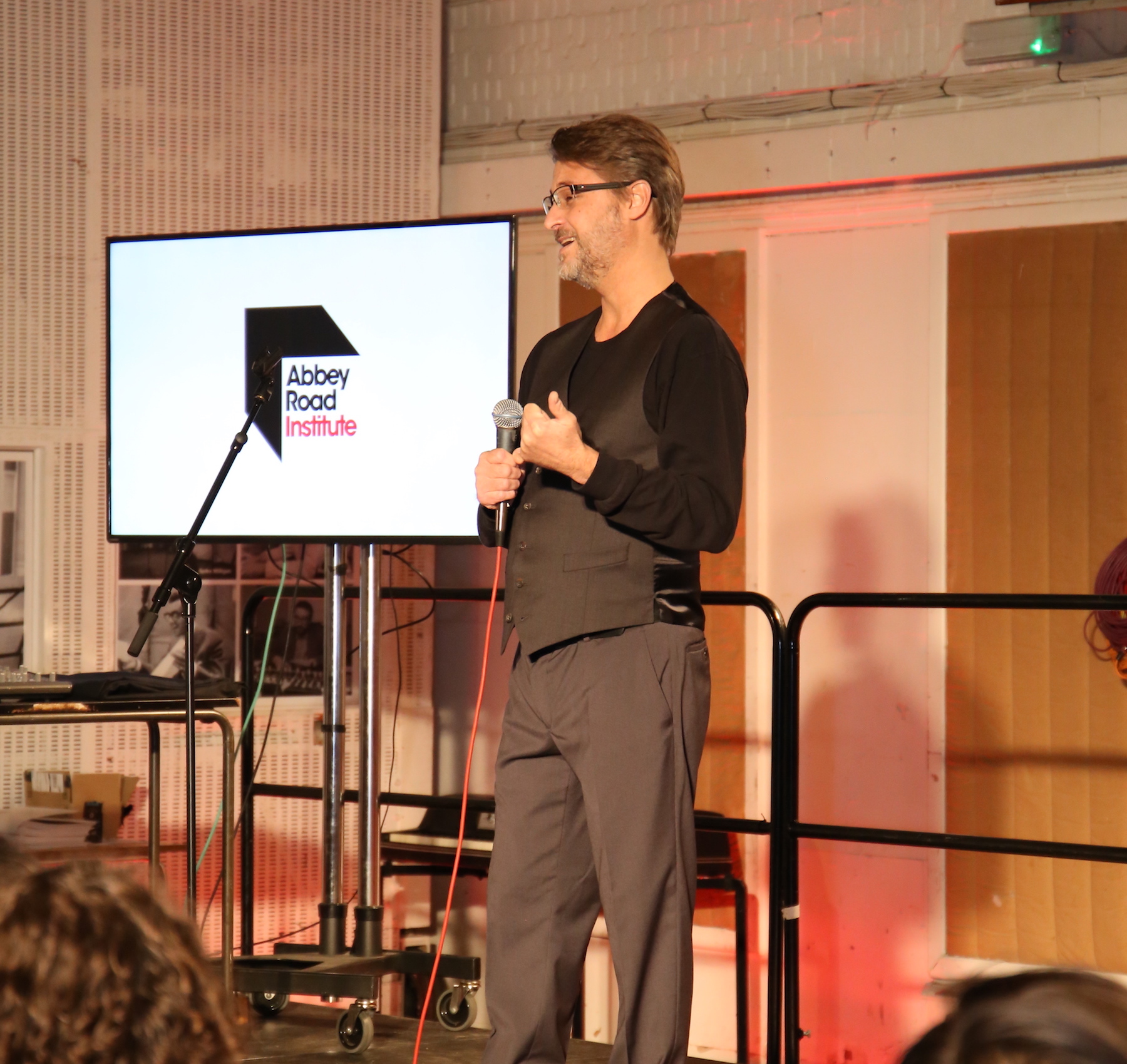 For the official diploma handover, students were invited upon the stage individually, where everyone got cheers from each other when they got up. It’s that moment when all your hard work gets recognised and shared. I have other friends who are also in music, but this was different. With our group, there was a different kinship, and we completely got each other, feeling comfortable to geek out together. 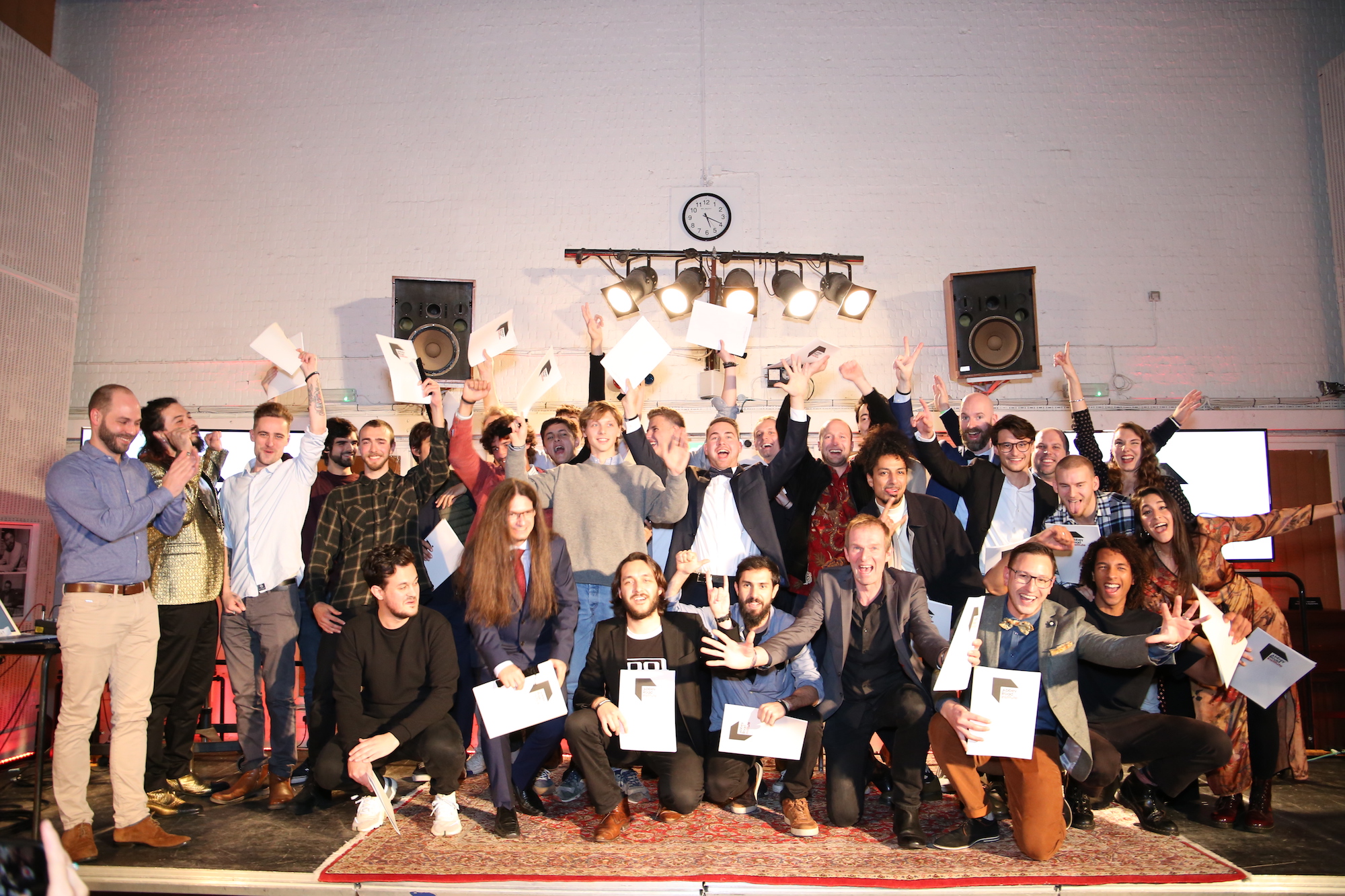 The complete group of Amsterdam Graduates. 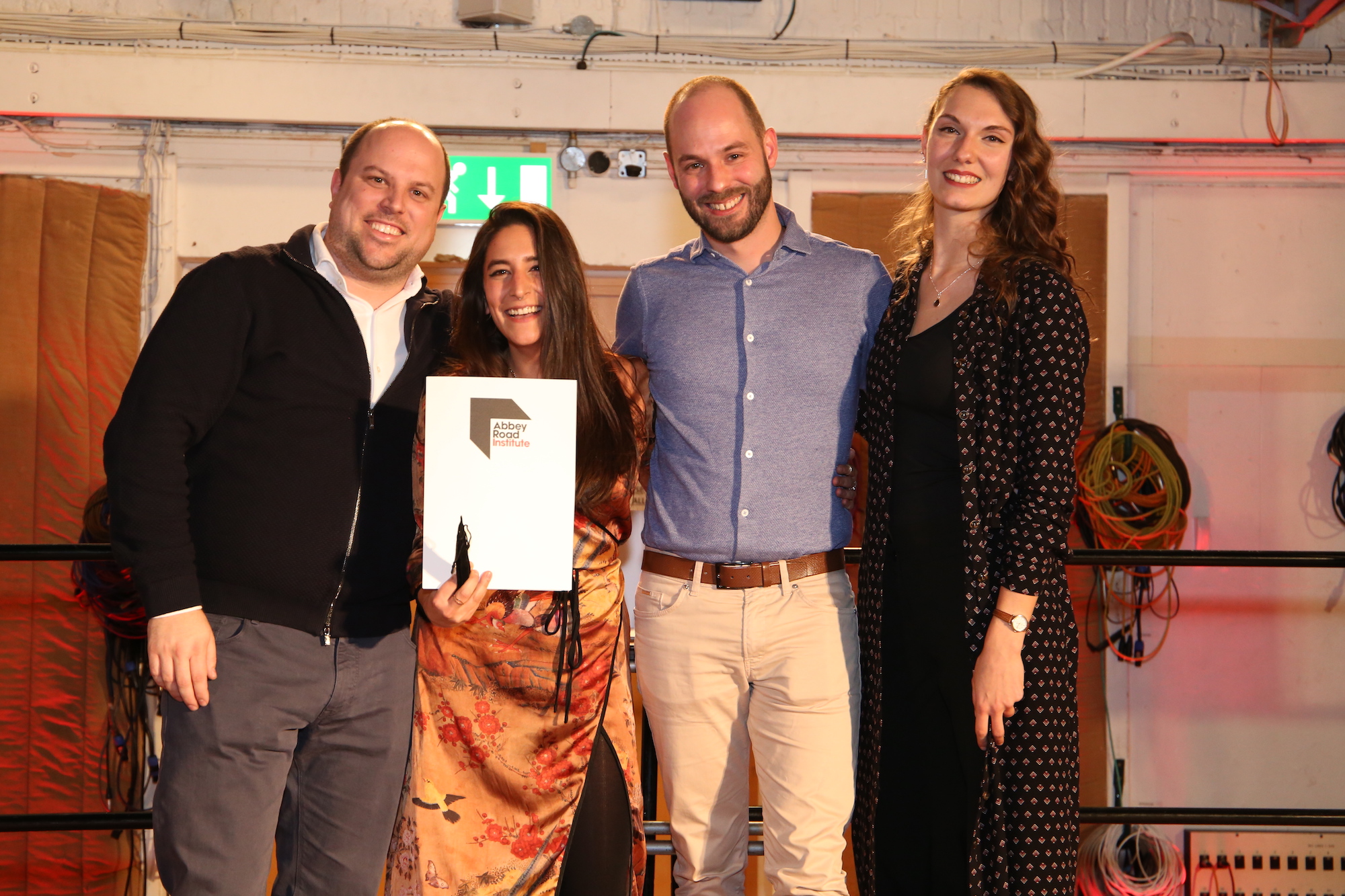 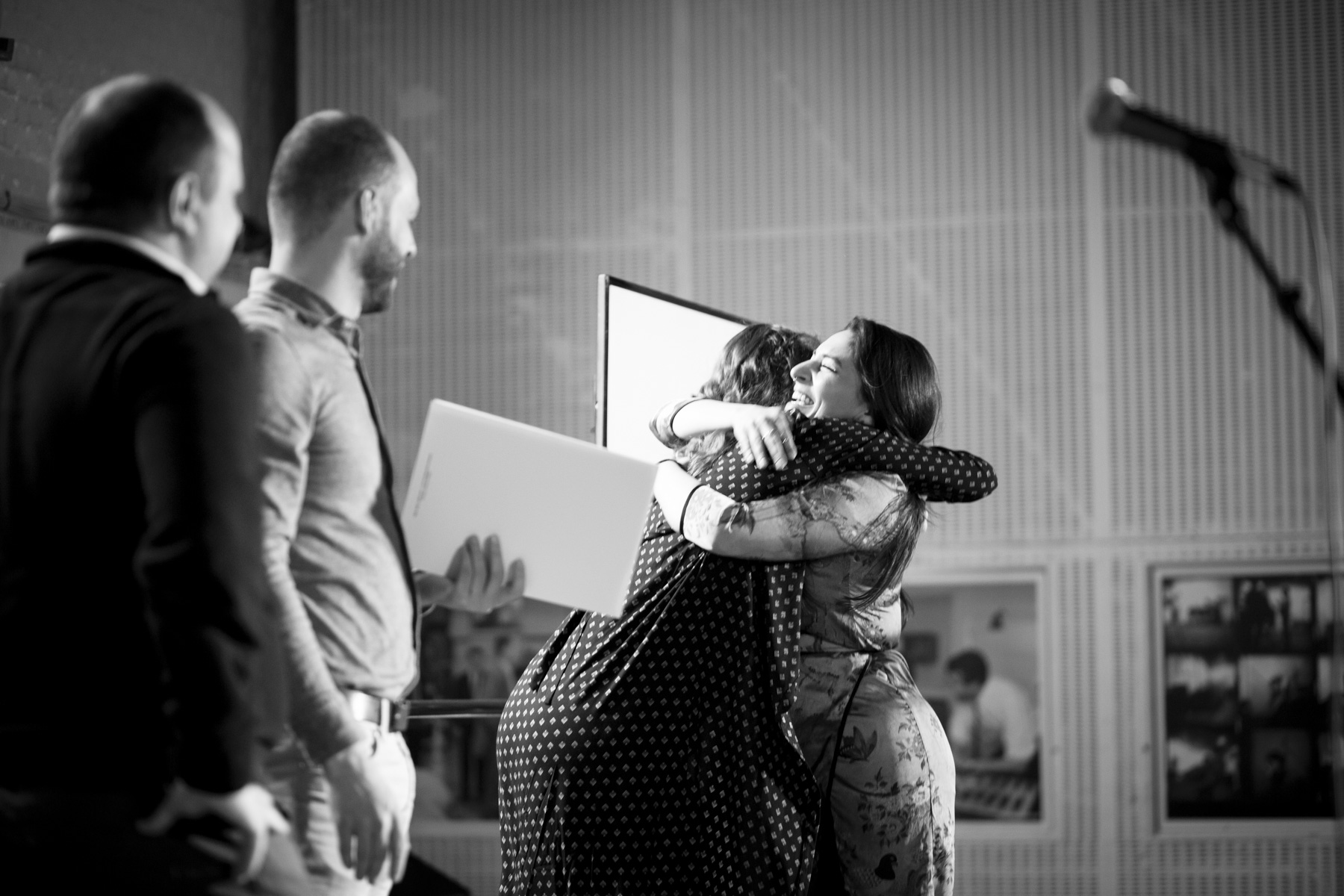 After the official ceremony, we were all invited to go to the historical Studio 1 for the official graduation party. There were so many professionals around there, who spoke so supportive and we’re sharing the tricks of the trade. The majority of success in the business is the human connection and relationships that form over time, and actually being at the right place at the time. I spoke to a lot of industry professionals, talking mainly about how the industry works. Most of my conversations resulted in the discussion “is it gear-related or emotion related” – the eternal questions of what makes a song prolific. There will be a constant back and forth between those two: technical components vs emotionality of the music. They gave me the insight and reassurance that you will always ping pong between the two. But the one steadfast thing that you should keep in all of this is your love for music. Otherwise, it can be quite a heartless job. And not to forget, the significance of the role of a sound engineer.

Performance by the band Marie White in Abbey Road Studio 1. 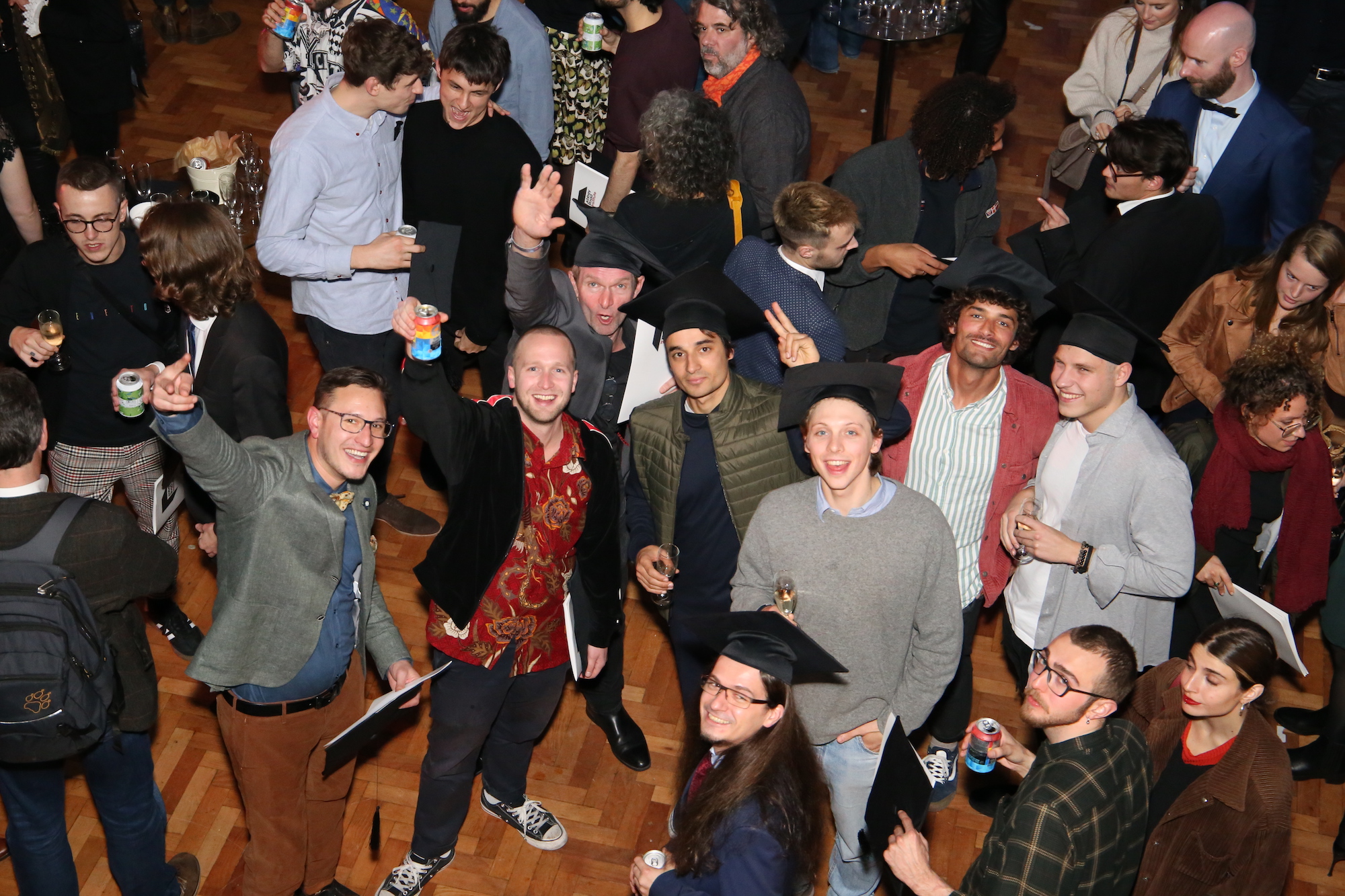 Students celebrating with family, friends and industry guests in Studio 1!

I got a chance to hang out a bit more at Abbey Road Studios with some Amsterdam staff members and some Abbey Road engineers. Over a few drinks, silly jokes, funny and beautiful stories of things that happened at the studios, I got the real behind the scenes Abbey Road vibe. Challenges that producers and engineers face, then and now, don’t change that much. They will always come back around to haunt us :).

After those great moments, together we fitted ourselves into a small Fiat 500 to drive to a pub close by, to meet up again with all the students from the Abbey Road community…minus the parents. And of course, all dynamics played out themselves beautifully. To cap the night off, a bunch of us traipsed our way to find a midnight restaurant for some lovely food, more chats and making sure we could handle waking up the next day in a proper manner.

Thank you so much, Gaya! How will you remember your year at the Institute?

For me, it’s two important things:

1. Knowing that I have the confidence stepping out of Abbey Road Institute Amsterdam, because of a whole array of life skills as well as invaluable knowledge that I have received at this Institute.

2. I have never been in a more supportive environment ever. Making you feel at home and that your music is really worth something.

And what are your next steps?

Focusing on vocal production first and foremost, and next to that songwriting, production and singing of course! I started singing Indian Classical music when I was around 7 years old, and I’m trained as an Indian classical singer. From there, I started to discover jazz and world music. So yeah, vocal production is my main thing, because the vocals are one of the most versatile instruments around! 🙂 And for now, I will stay in Amsterdam. Being in a city where most of my favourite musicians reside and visit, it is crucial for me to grow and continue to learn what it means to be a professional in this industry. Also, I’m blessed enough to have talented friends who live close by that I can always collaborate with.

See the 2019 highlights video below, where Gaya appears at 1:58 minutes. Learn more about Gaya’s music by checking out her page!

You can also visit our Graduation Ceremony photo gallery for more pictures.

ADE 2019 at Abbey Road Institute Amsterdam
Emotion in Music (Part II), a practical approach
Download Prospectus
Download the prospectus for our course: Advanced Diploma in Music Production and Sound Engineering.
Categories
Recent posts
23/02/2021
Educational design with Roel Verberk
Read article
02/12/2020
My favourite album
Read article
23/07/2020
Meet our Alumni: Bruno ‘Rex’ Paulo Cerecero.
Read article
This site uses analytical cookies to improve your experience on our website. You can read more about our how we use cookies in our privacy policy. Please accept to confirm we have your permission to place additional tracking cookies:YesNo