It’s time for our second article! And for this one we decided to have an in-depth look into one of the most iconic compressors/limiters used in music production, the 1176. At the bottom of this page, you’ll find a cool interactive unit that you can play around with while listening to music.

History
Bill Putnam Sr., a well known producer and engineer, started recording in the early 1930s. He was the first engineer to use artificial reverberation using echo chambers for commercial recordings. While designing his own consoles and equipment in the 1950s, he decided to found his own design and manufacturing company, Universal Audio.

From building pre-amps and compressors inside recording consoles, he decided to create an outboard tube-based compressor, the 175 & 176. Putnam Sr. redesigned his successful 175 & 176 using FET’s, and so the 1176 was born. A major breakthrough in limiter technology.

Design
We will go through all different revisions of the 1176 below and we’ll talk more about different components used throughout the years. But for now, we’ll focus on the current 1176 reissue.

The input section has a potentiometer to control the amount of attenuation, followed by the transformer. The signal attenuation helps not to overdrive the FET in the gain reduction stage.

Compression is achieved by a Field Effect Transistor (FET), used as a variable resistor. The signal used for gain control is sensed after the gain reduction (feedback style compression) and it is fed to the gate of the FET. The greater voltage that is applied to the gate, the more gain reduction the signal will receive.

Uniqueness
The 1176 is extremely versatile since it can be used as a compressor or limiter, and is definitely unique in a few ways. Let’s go through them:

The main key to the sonic imprint of any limiter or compressor lies in its attack and release times; these are the parameters which most affect how “tight” or how “open” the sound will be after gain reduction.

However, unlike many other devices, the 1176LN attack and release times get faster, not slower, as their corresponding knobs are turned up (clockwise).

Most compressors have a threshold, the voltage level where the gain reduction starts. The 1176 doesn’t have one but instead uses the input level to define the amount of voltage going into the compressor.

The 1176 is a feedback style compressor and although it does have a fixed threshold, the threshold changes depending on the ratio. At higher ratio/thresholds, the knee is also harder, which is obviously useful for controlling peaks while lower ratio/thresholds have a softer knee for subtler gain reduction.

The way the 1176 sounds, and specifically, the way All-Button mode sounds, is partially due to it being a program dependent compressor. The attack and release are program dependent, as is the ratio.

The 1176 will faithfully compress or limit at the selected ratio for transients, but the ratio will always increase a bit after the transient. To what degree is once again material dependent. This is true for any of the 1176’s ratio settings, and is part of the 1176’s sound.

But in All-Button Mode, a few more things are happening; the ratio goes to somewhere between 12:1 and 20:1, and the bias points change all over the circuit. As a result, the attack and release times change. This change in attack and release times and the compression curve that results is the main contributor to the All-Button sound. This is what gives way to the trademark overdriven tone. The shape of the compression curve changes dramatically in All-Button. Where 4:1 is a gentle slope, All-Button is more like severe plateau! Furthermore, in All-Button mode there is a lag time on the attack of initial transients. This strange phenomenon might be described as a “reverse look-ahead”.

One more thing worth knowing: the perception of distortion is increased with lower frequencies in All-Button Mode. Because of this, you can make a pair of overheads or a room mic explode with the 1176, especially with the frequencies and transients created by the kick drum.

Sound
The 1176 has a brightness and presence to its sound, sometimes referred to as a high-class grit. It also seems to create extra energy, by a musically-pleasing pushing of the tone in the lower mids.

Bruce Swedien used his 1176 on all the Michael Jackson vocals he recorded. But besides vocals, it also works on just about anything else, from kicks, snares and claps through to synths and even full drum sub-mixes.

The amplifiers and transformers all by themselves give a desirable “hot” quality to anything passing through them. 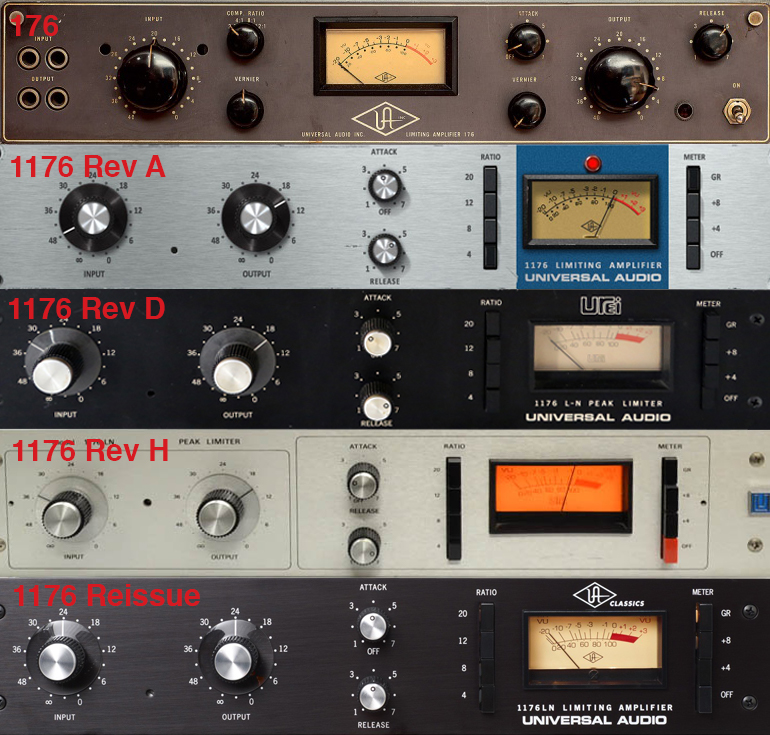 Revisions
The first 1176 compressor was created in 1967. Although it was the basis for all 1176 revisions, the rev A (SN 101-125) has numerous peculiarities that set it apart from the others. It is the only revision to use FETs rather than bipolar transistors in the preamp and line amps. It is also cosmetically unique, sporting a distinctive blue stripe through the meter. Finally, the rev A does not have the low-noise circuitry of later revisions, which means it imparts more harmonic distortion at the expense of a higher noise floor.

4 months later, the AB (SN 126-216) revision was introduced which improved stability (using a bypass cap) as well as noise by changing some resistor values. Revision B (SN 217-1078), the most commonly seen blue stripe 1176, features a bipolar transistor instead of FETs in the pre-amp stage.

In 1970, the unit received quite some fundamental upgrades. Revision C (1079-1238
) saw an updated LN (low-noise) pre-amp circuity which was encased in epoxy to protect the circuit. At this stage, the faceplate turned anodized black.
In revision D (1239-2331), the LN module was no longer used and the circuit board was redesigned to accommodate the LN circuitry on the main board.

Then we’re at the last Revision G (7053-7651) of the Blackface series. Here the input transformer was removed and replaced with a differential op-amp stage, and program dependency is also removed.

Revision H (7652- 8000+) changes the faceplate to a brushed aluminum with red “Off’ button. This is the only revision with a blue UREI logo. In 2000, Universal Audio launched the 1176 with the Reissue. This is most similar to Revision E.

Our students will have access to a few different analog revisions as well as the UAD 1176 Plugin Collection, so they’re able to hear and experiment with many different options.

Some fun
We created a quick interactive educational gadget that allows you to listen to the sound of the 1176. We first thought it would be better to do it in stereo, since most of you are probably listening on headphones. Universal Audio also released a stereo version of the 1176, the 1178 which can be switched between stereo and multi-mono. But then we realized that the effect is much more noticeable in mono, which is why you’re only hearing one side.
The sound of our unit is probably even a bit grittier than most of them, but it does give you a good reference. Ray Richardson and Giovanni Casu were kind enough to share one of their songs, which we could use for this demo.

We basically ran 34 seconds of the song via 22 settings through our analog 1178 and captured it using a Focusrite Rednet interface (via UA 2192 ADs). The quality you’ll hear is 320kbps MP3. The tool below allows you to switch between these “captured files” and thereby listen to 4 different settings:

Approach towards mixing… Do you feel it?
Vox AC30