For most of us musicians and producers, working with a real orchestra is kind of a dream come true. And definitely a lot more satisfying than working with your standard sample library. But teaming up with the multiple Grammy-winning, largest full-time jazz-, pop and symphony orchestra in the world – let’s say – that’s just next level.

Back in 2014, the Metropole Orkest started its own Academy, where talents of Dutch conservatories are invited to participate in special workshop weeks. These musicians then form a full orchestra that plays together. Besides learning about planning, organisation, marketing and such, the Academy really focuses on the artistic and musical-craft aspects of playing in- and working with an orchestra.

For this very special Academy project – Soul with Shirma Rouse – Abbey Road Institute Amsterdam was invited to join in! The project focused on making an orchestra recording in the Metropole Studios and three of our students were selected to lead these recording sessions, under the guidance of Metropole’s in-house engineer Dirk Overeem. The repertoire of the week included six fully orchestrated soul and jazz songs, from Aretha Franklin and Chaka Khan to Billie Holiday and Dionne Warwick. Together with Metropole Orkest’s engineer Dirk Overeem, our ARI students Rudy Mackay, Robin Kettelhake and recent graduate Arthur Veys were responsible for an incredible recording. Needless to say, it also was quite a nerve wracking experience, but we’ll come to that in a second. We kindly asked Rudy to keep a brief journal to give us a look inside the Metropole Academy project. Picture credits go to photographer Reinout Bos.

As the orchestra was scheduled to start on Monday at 10 am sharp, we had to be ready setting everything up by Sunday evening. And we really do mean everything. When we walked into the big live room of the Metropole Orkest, it was practically an empty gym. So after deciding where we wanted to put every section (strings, piano, harp, woodwinds, brass, percussion, drums, bass, guitar, vocals) we simply started by putting up chairs for the players. Even this was informative as some players (e.g. the celli and bass) need different chairs than others with different instrument stands.

(text continues below the image)

It took us eight hours to set up. Okay, granted, three of us had never done this before. But still. We had to make an infrastructure for all the microphone- and electrical cables, keeping them easy accessible in case we had to replace some but also making sure no one trips over them while holding their favorite Stradivarius violin. Next up, we gave every player his or her own headphone system, build a vocal/drumbooth with a drumkit in it, and tactically place sound barriers throughout the room. And not to forget, place about 80 microphones – the good old Decca Tree at the heart of it, and we decided to also put up a Hamasaki square for surround recording – and use almost every XLR-cable there is in the whole Benelux (jokes). After line checking each mic, we were ready for rehearsal day. And a good night sleep!

Most people in the business have preconceptions about musicians; if you tell them to show up at 10am, they will text you in the afternoon that they’re on their way. The fun thing about orchestra players though, is they are really punctual and on time. At 10am sharp they kicked off with a brief introduction and then rehearsals started. This gave us loads of time and opportunity to do an extensive soundcheck (we used a Neve VR, yay) and adjust the microphones while they were playing. We did some test recordings just to see if the system worked well and it did. 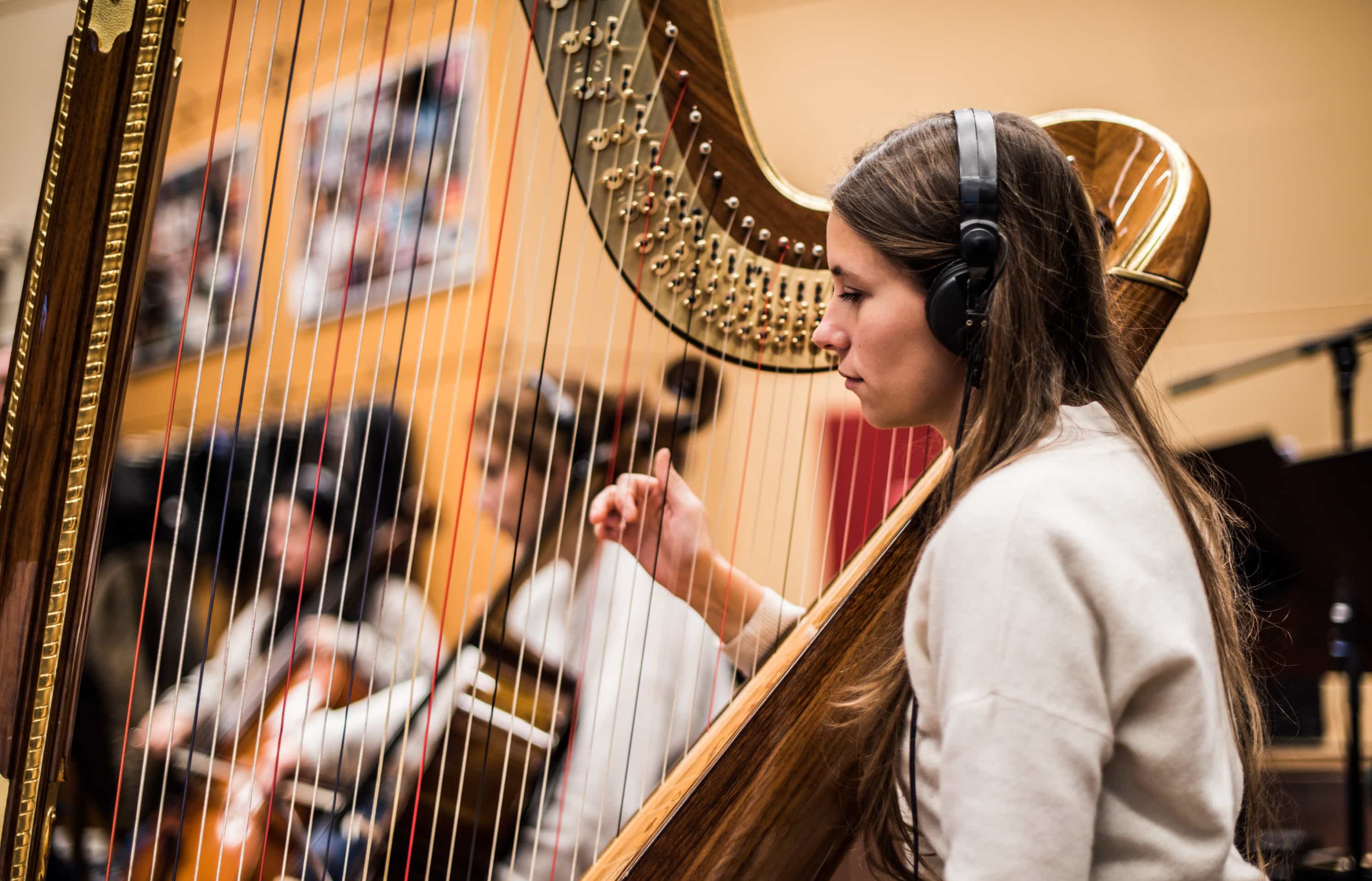 We used day two of rehearsals for fine tuning our recording setup. It became a bit more daring, since the conductor wanted to rehearse with a metronome on everyone’s headphone this time. This meant we had to prepare our recording sessions with a solid click track. Mind you, some of the songs had mind boggling time signatures, tempo changes and repetitions. At least to us, as we aren’t used to reading full orchestral scores everyday. Nevertheless, we did a fine job – at least that’s what we thought.. 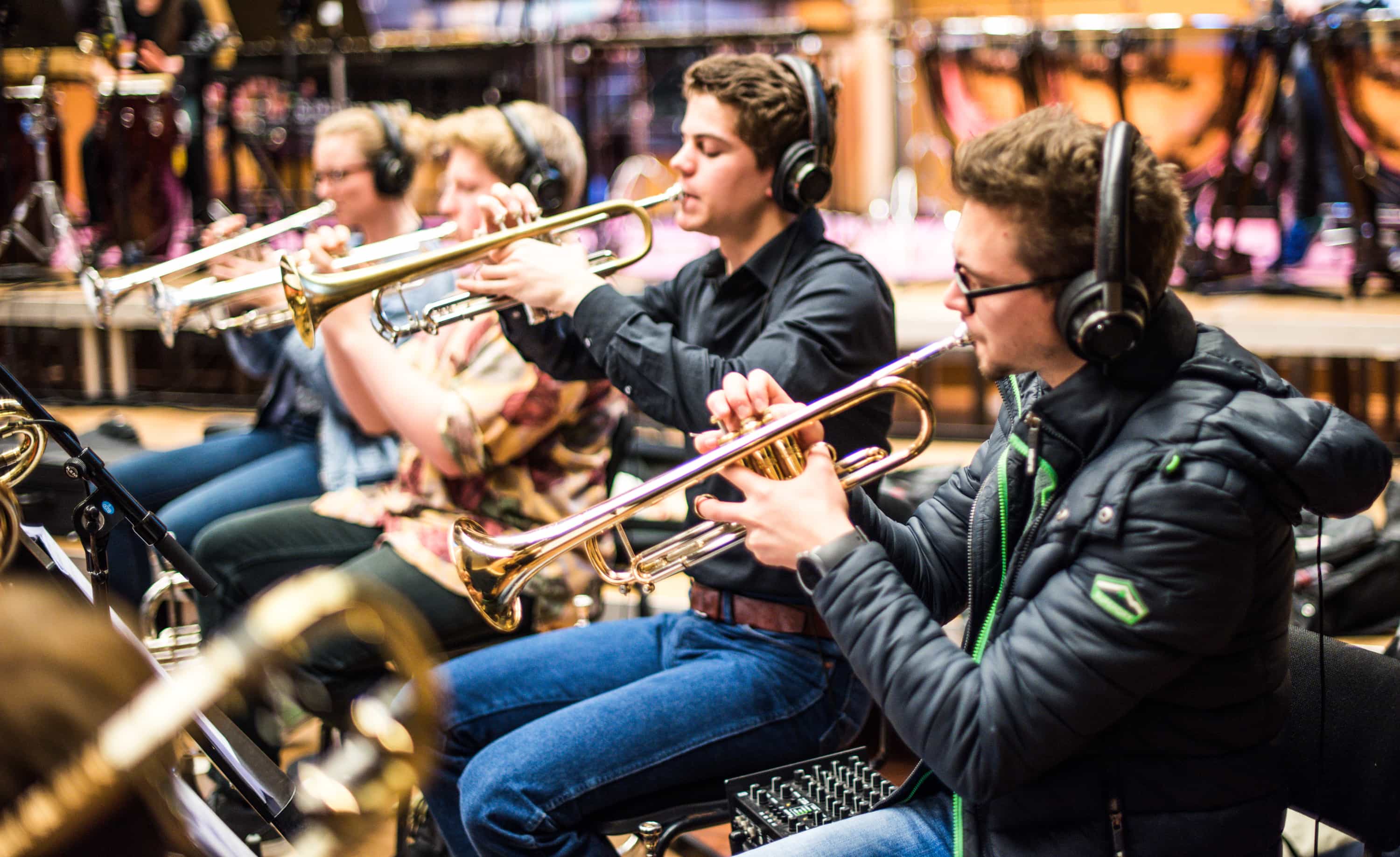 Recording time! That five to ten seconds between a conductor saying ‘can we roll?’ and us actually getting ready to press record are unbelievable nerve wracking. You are double checking if every mic is record enabled (crap we forgot all brass mics); are we starting at the right point (no he said bar eleven not seven); with the right tempo (they changed that this morning, right?); and the right countoff (it’s in 7/4 here but he wants 4 beats countoff I guess?). But then the moments between you saying ‘yes, here we go’ and Pro Tools crashing are just deadly.. A room full of people waiting while you reboot – that’s intense. 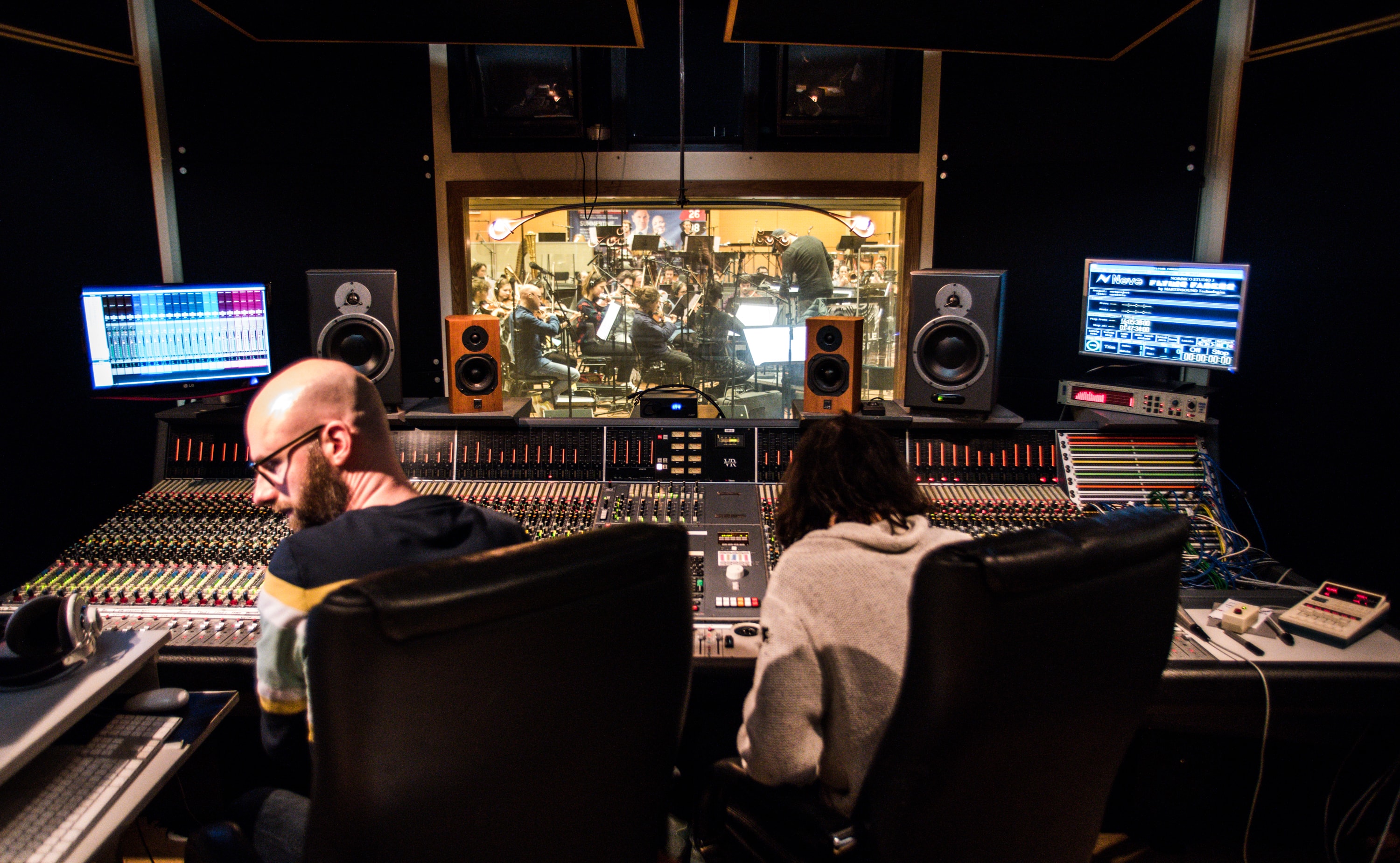 Besides a lot of fun, we also had some setbacks on the first recording day. The first few hours we had a computer issue that made it crash just about every other time we hit record. We also discovered that the click tracks we made weren’t in sync with the scores on paper. For example bar 20 on paper could actually be bar 28 in our session, which made it difficult for us when the conductor wanted to punch in at a certain point. That being said, I think we adapted to the situation quite fast and especially on the second day of recording it even went somewhat smooth.

We recorded one of the tracks in layers, i.e. with the different sections apart from each other: drums, bass and guitar first, then strings, then brass and so on. Although it’s time consuming, this way you have the least spill of the drum and brass into the string mics for example. For us, as well as for the players, a very cool experience. 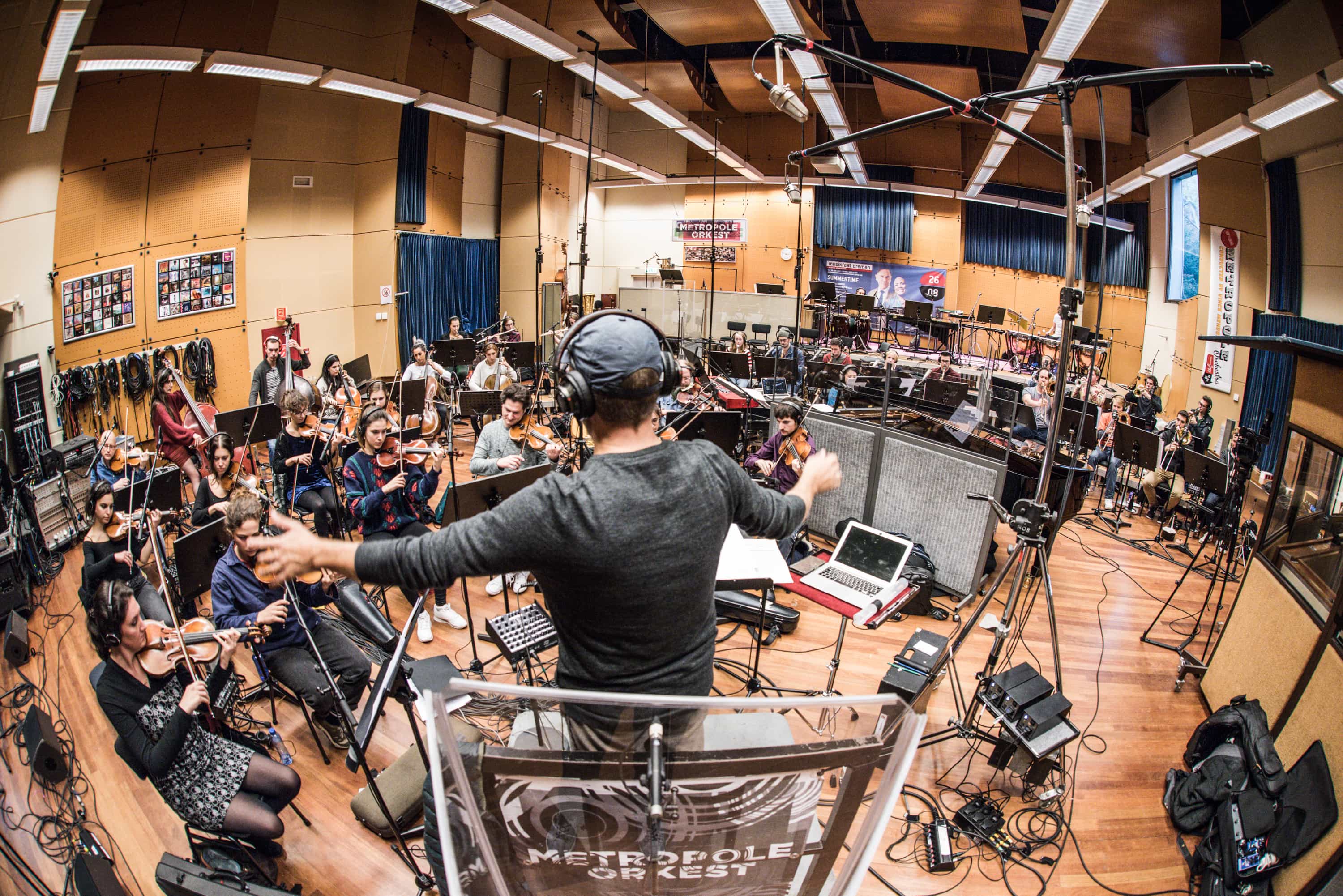 “The sound of an orchestra – when the players are good – is full and dynamic enough and does not need that many alterations. The main thing we paid attention to while mixing was to make room for the arrangement, and really guide the listener through the piece.”

We had an amazing amount of help from the in-house engineer of the Metropole Orkest – Dirk. Not only with recording but also with mixing, as he knows exactly how the instruments are supposed to sound and he of course knows the studio inside-out. We started off with creating a basic sound for the instruments and vocals, using equalisation and compression. And sure, some outboard gear as well, I mean why wouldn’t you.. We then set up a volume balance for the first song we mixed, which served as the basis for the rest of the songs. For the console lovers out there: we used a Neve VR with flying faders. This allowed us to play the song a few times, while record changes in the volume automation. Super cool. 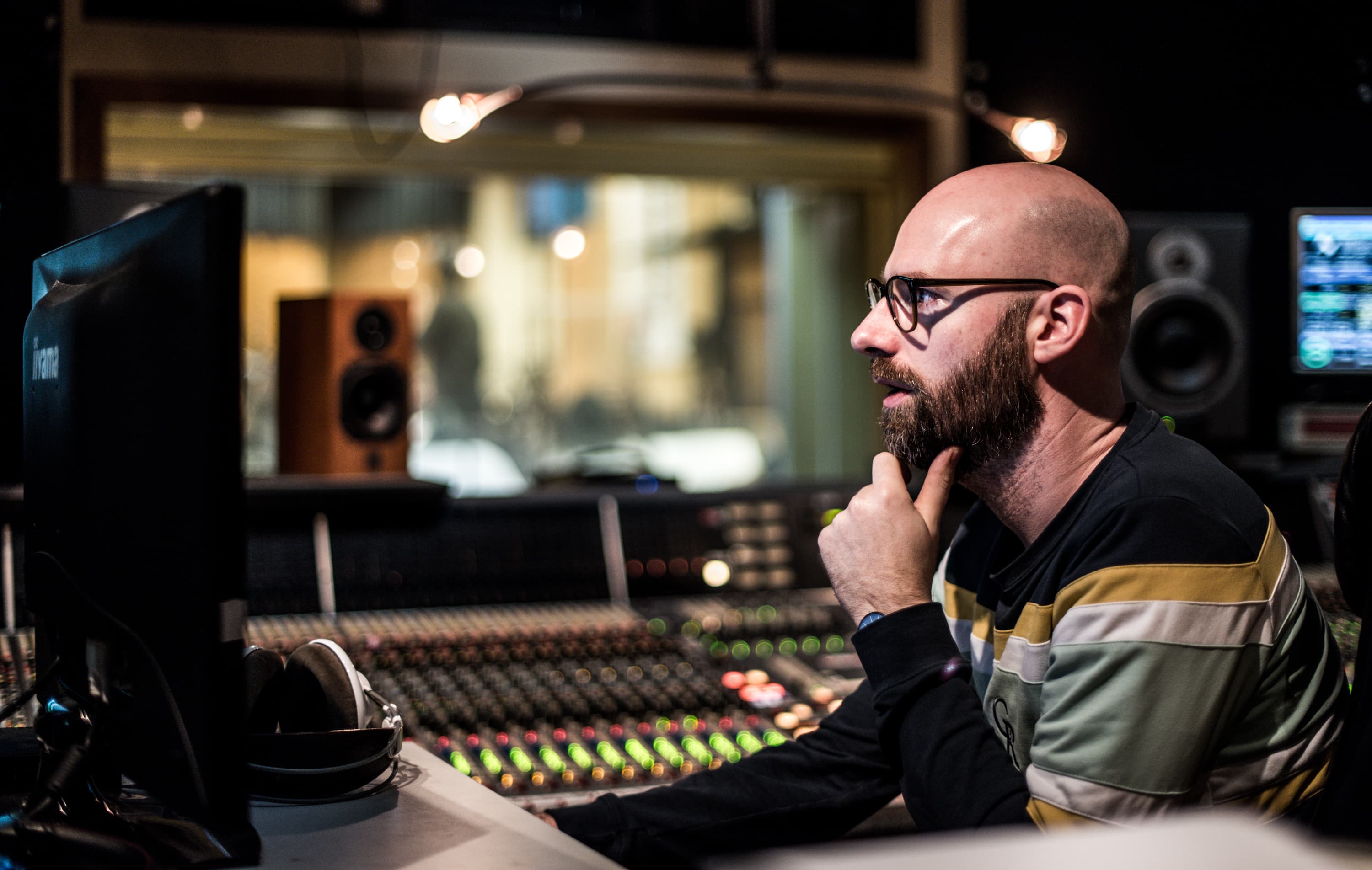 As producers/engineers who are mainly used to mixing pop, we didn’t use that much compression and special trickery, let alone plugins. The sound of an orchestra – when the players are good – is full and dynamic enough and doesn’t need that many alterations. The main thing we paid attention to while mixing was to make room for the arrangement, and really guide the listener through the piece. When there’s a sax solo, make sure we can hear it. When the emphasis are supposed to be on the strings, make room for them. We managed to mix all the six songs in one day, although we came back a week later to make a few minor changes. It’s always good to do some final tweaks with a fresh pair of ears. Together with ARI Amsterdam head “master” Robin Reumers, we mastered the tracks to give them a slightly more open feel, a tighter lowend and overall clearer vocals.

Looking back on the project..

It became even more clear to me that recording an orchestra is next level, you really have to know your stuff. And with stuff I mean everything from knowing Pro Tools and its shortcuts inside out and operating the console, to score reading and knowing how to communicate with the conductor. Even though you think you’re so well prepared, you are still underprepared, especially doing such a big orchestra recording for the first time. You encounter so many issues you didn’t anticipate; it definitely takes lots of experience before you feel in control of the session. While being in quite a stressful situation, you need to keep communicating with the conductor and – not to forget – with your team. You can easily lose yourself in your technical hassles. 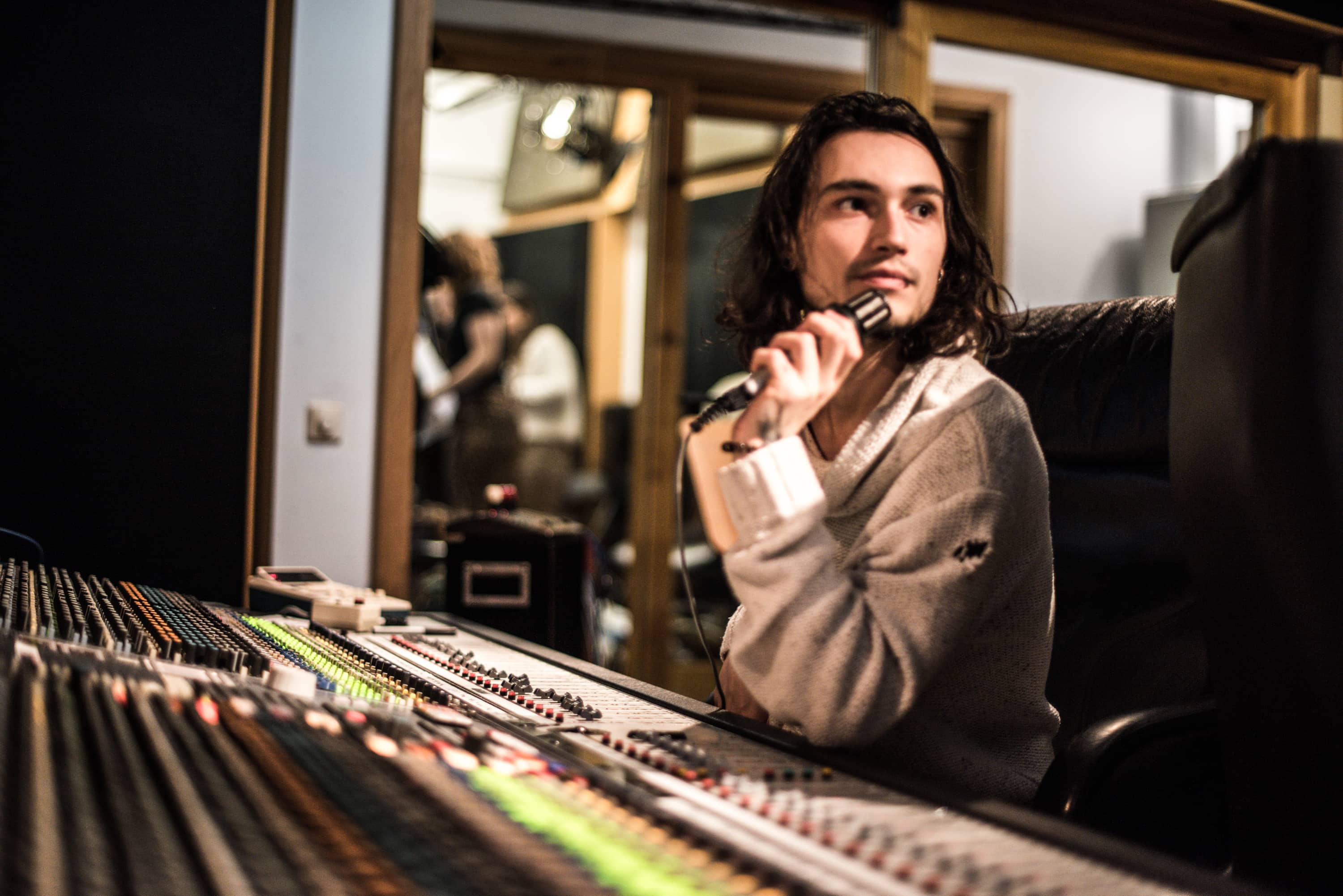 During the rehearsals and recordings you actually don’t have direct contact with the musicians. Even when there really was something wrong, we had to say to the conductor: “The percussion player should really shake closer to the microphone.” Although we didn’t have a lot of “free time” – because in most breaks we were doing some vocal or trumpet overdubs and such – we did get the chance to chat with the musicians. Luckily they were seeking contact with us in the few breaks we had, and even joined us in the control room to have listen. Those few moments already broadened our network a lot, I’ve now got a whole bunch of new Facebook friends I can contact for projects or to collaborate with. 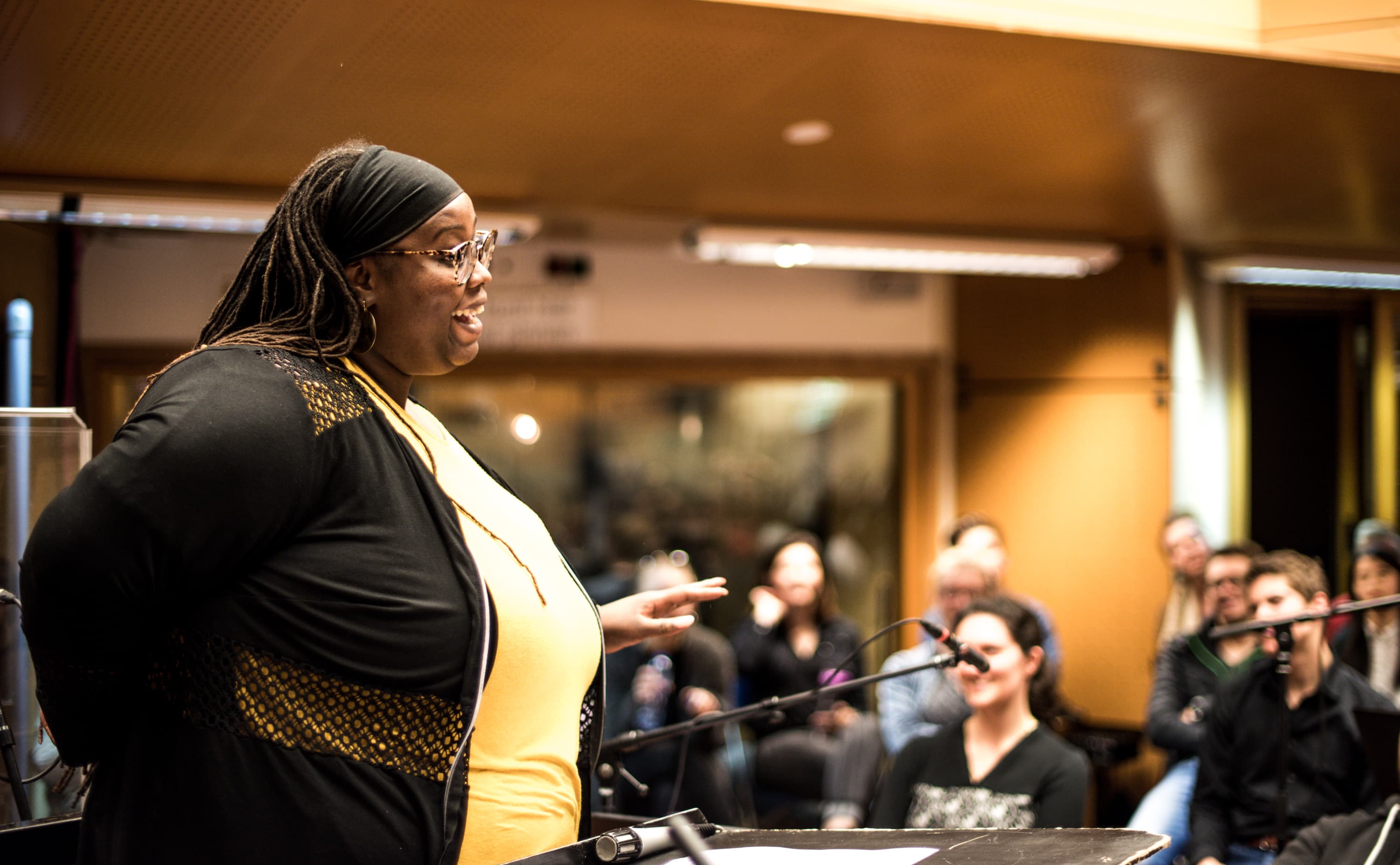 The one and only Shirma Rouse.

Apart from the massive amount of recording experience we gained, the project gave me an extremely good insight how orchestras work and how I can use it in my own productions. There are so many aspects you already need to keep into account in the production process, from arranging and orchestration, to preparing Pro Tools sessions and exactly knowing what you want to get out of the recording.

If I would like to do orchestra recordings again? Definitely yes! Doing this everyday? Don’t know about that.. As an engineer, it’s awesome to do, but it’s also an incredibly tough and intensive job. I have a lot of respect for the people who do this on a daily basis, like Dirk Overeem. Thanks to everyone involved for making this such a special experience!