A day in the studio with Sylvia Massy

…is a quote attributed to Pablo Picasso. But from a music recording and production perspective, we believe that Sylvia Massy is the personification of that quote. Massy is a legend for her unique methods and perhaps best recognised for her work on 1993’s Undertow, the full-length double platinum-selling debut for Los Angeles alternative metal band Tool as well as her work with System of a Down, Johnny Cash, Prince and Red Hot Chili Peppers.

Last month, we had the ultimate pleasure of having Sylvia Massy at our Amsterdam campus for an exclusive recording masterclass with our students. As part of her Abbey Road tour, she visited the Abbey Road Institutes in London, Berlin, Paris and Amsterdam. Giorgos Kravvaritis, who is from Greece and currently studying at Abbey Road Institute Amsterdam, wrote a great piece about this unique experience being her Protools operator and assistant during the masterclass. In today’s blog article he will take you through the whole recording process with Massy, and share some valuable insights and takeaways with you. Enjoy!

Giorgos Kravvaritis: a day in the studio with Sylvia Massy

During the last couple of years, Sylvia Massy’s approaches to recording have been at the top of my recording tips list for outrageous, unorthodox, weird techniques and things that make you shout ‘THIS IS DEFINITELY NOT HOW IT SHOULD BE DONE!’. Through her work with artists, I respect a lot, and mostly due to her attitude towards recording and record making, I was so thrilled when I learned that she is coming for a masterclass. To be given a chance to see her work up close and dig deeper into the recording and attitude extracting performance methods of Sylvia Massy has made me borderline annoying to everyone else at the Institute for the last couple of months.

The session preparation began straight away as we entered the studio with Sylvia preparing the microphone list for the session and having a brainstorm with all of us, discussing microphones and her explaining her preferred/potential mic placements. During that time she also assembled her team of assistants for the day, by making use of nearly everyone present! Her experimental, raw techniques and assemblies came into play when she asked for volunteers to make: a sub-kick microphone from a woofer of a retired monitor, a telephone rewired into a microphone for drums, as an extra distorted unit in the room. Not to mention an old cassette recorder, which was fed a mic input, and would be used as a room sound layer of tape-distortion. At some point during the mic decision, Sylvia pulled out the so-called “periscope” microphone, an unusual but great mic which I believe most, if not all of us were seeing for the first time. “This is a pretty usual microphone except for the fact that it has a built-in compressor.” More than that, this microphone was going to be assigned to a volunteer who would be walking-moving with the microphone in all directions on the room during the recording process. Not even an hour in and things were getting very exciting just by observing her decisions. I believe that Sylvia’s microphone choices were directly influenced by the sound she wanted to achieve with the band, purely at the recording stage. Obviously, this is a skill that comes with experience and through trial and error, but I felt that it gave us beginners a powerful point to look and prepare for in the future. By choosing the right microphones and making the sources as good as they can get felt like a very crucial thing to her approach for recording. 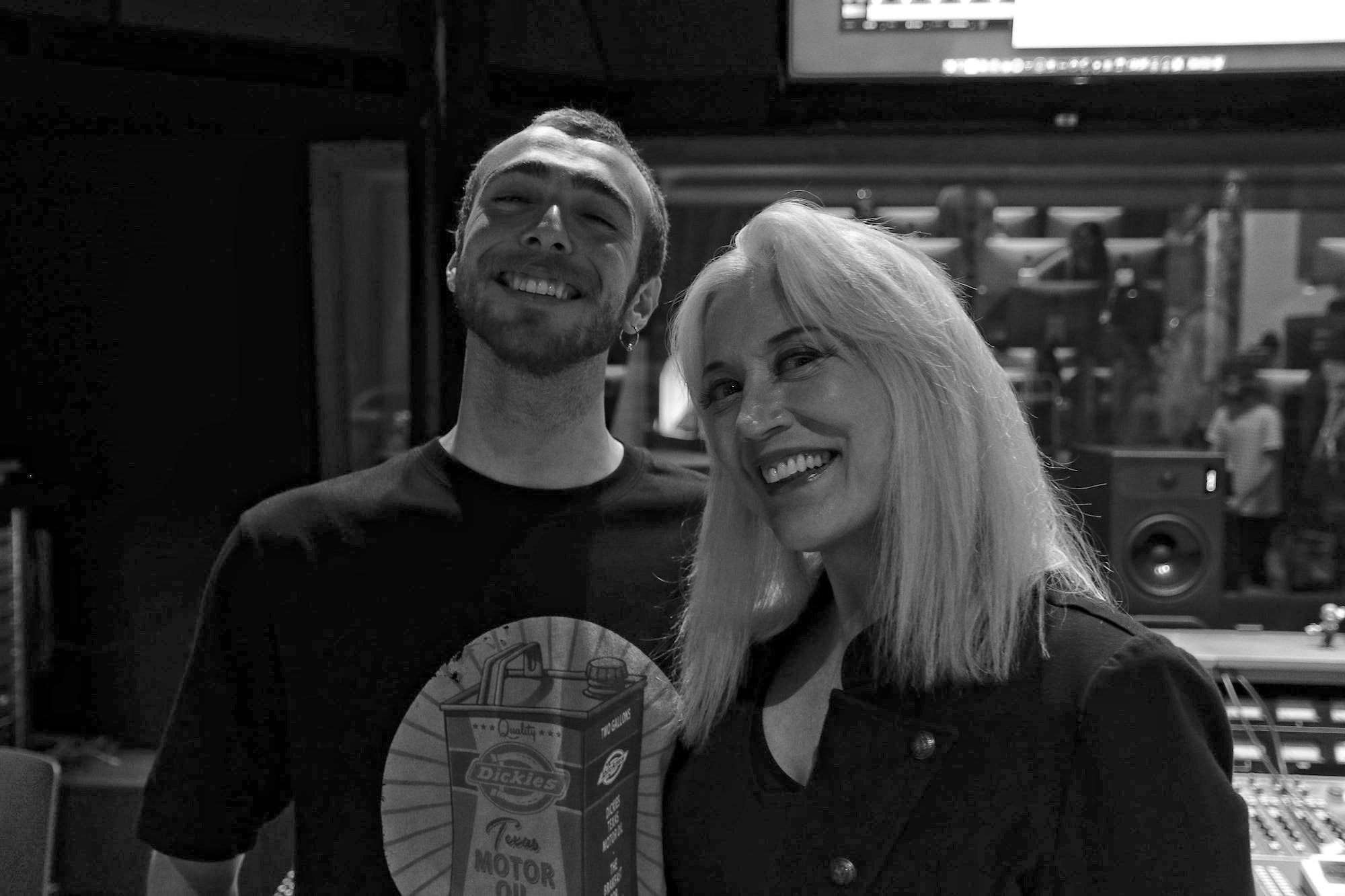 I was blessed and lucky enough to be present on the day and assist her as the Pro Tools operator, which gave me a super detailed and close eye of what Sylvia was doing throughout the session, in the control room. While I did my best to not appear star-struck by the situation, I sat next to her and got ready to follow Sylvia’s layout on the desk. While setting up the desk, she explained her method of ‘summing’ tracks into the desk and picking them up on a single track in Pro Tools. For instance, her top and bottom snare microphones were already phase shifted during the patching stage and picked up in a single mono track in Pro Tools. She continued to do so with several mics, including toms, overheads, and room mics. The band arrived probably at the same time as we were finishing the desk setup and begun unloading their gear in the live room.

What I admire is when engineers – top of the game or not – are introducing themselves, putting the music above themselves, being simply a pleasure to work with and being in the room with the musicians, making them feel that ‘we’re in this together and we’re going to make a sick recording today’ before any mics are placed on a stand. At this stage, I began understanding the importance of effective and direct communication and even more, its’ timing, for the progress of a session. I felt Sylvia was all about that. Talkative, responding to every question about everything, and catering for the needs of the musicians at all times. Calm and still rock n roll in her approach of ‘schooling’ the musicians into her methods, in such a short amount of time. I felt a big chunk of her work and mental preparation is done in the room with the musicians, setting up so the sound coming out from the instruments in the room is already great, and then focusing on capturing the band’s performance at this given time and space. The band “Queen’s Pleasure” ‘s lineup was – drums, bass, guitar, vocals – with some overdubs to be completed after the live tracking. Everyone at this stage was busy with getting the live room in order, setting up the mics and awaiting for Sylvia to do the directing. 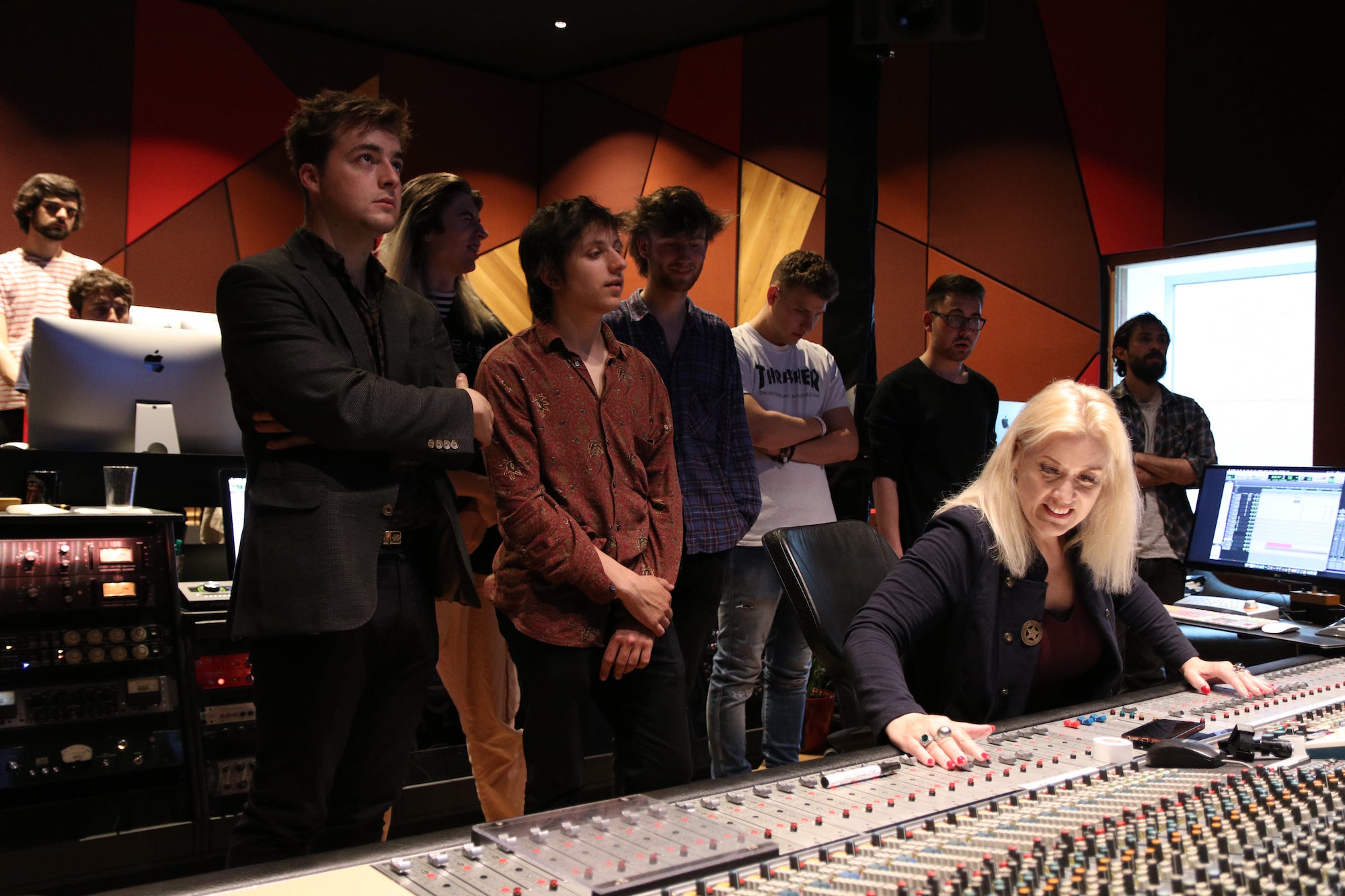 We were ready to begin the takes, and she told me to record everything and to keep everything that goes in. I might have deleted a couple more things than I should. After the initial first take, and during the session, we observed Sylvia communicating her ideas to the band with a flawless ability to translate her vision of capturing the song. The musicians were mostly encouraged and were following up on her requests throughout the session and got their best attitude on their performances. The vocals were tracked in the control room, with the singer pulling out great takes next to her. The communication was instant, and her directions did not have to travel to the singer’s headphones every time she would have to push a button to talk to him. I really felt that this method was creating a way more immediate and urgent feeling on the recording, and even more, it did not create an atmosphere of disconnection from the producer. As an outcome, I believe her stance and methods attract a more raw approach of capturing more emotionally charged performances than sonic perfection, and that was evidently proved throughout the day. 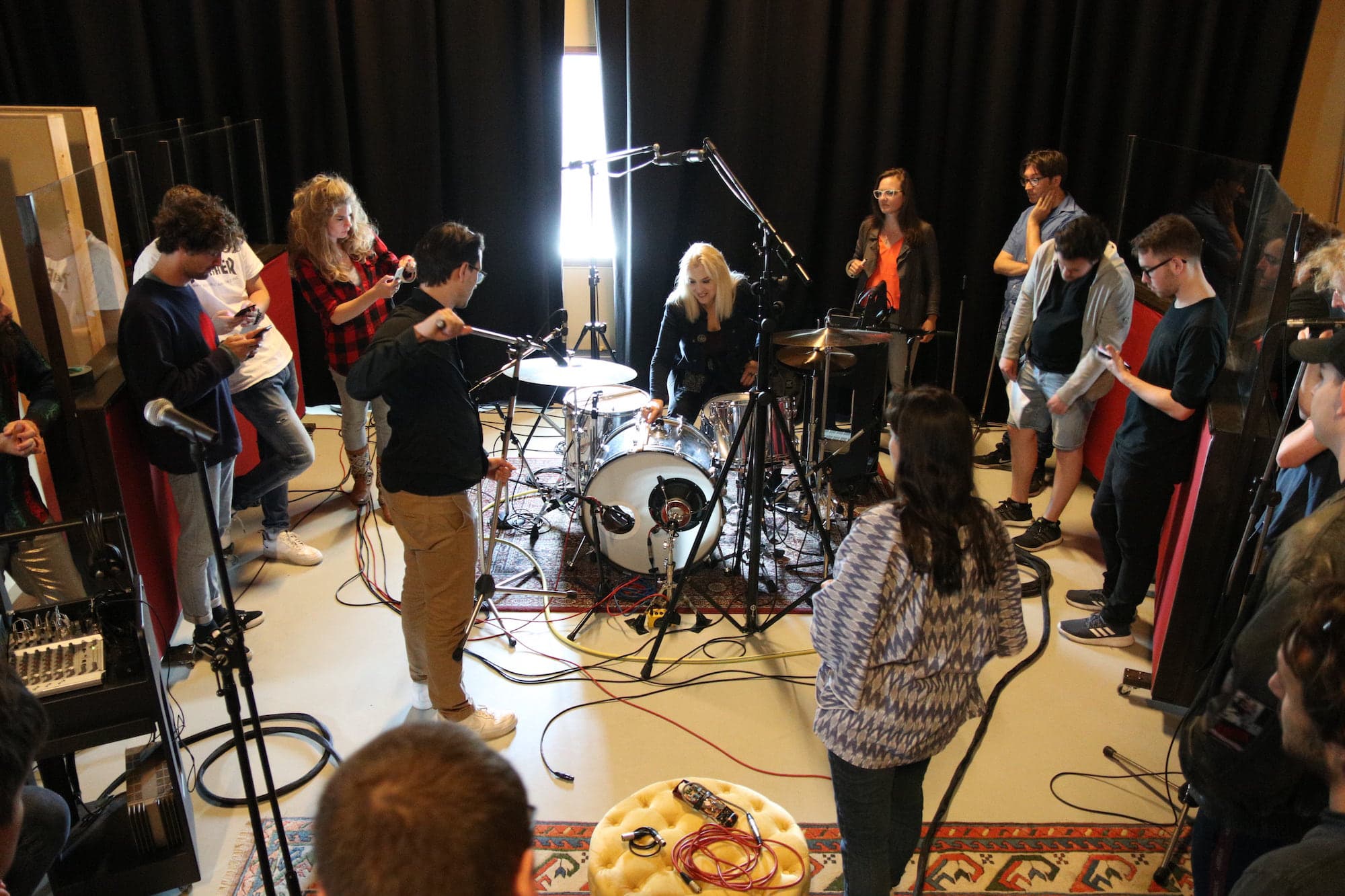 A day in the studio with Sylvia Massy feels like…

This session was a rollercoaster of emotions for me. Being her operator, I felt the pressure of not being fast enough to catch up, accidentally doing something wrong etc., – the technical side of things I was too focused on at the start of the session instead of the music. But with her directions and calmness, I felt sure that things were entirely under control and I got to really enjoy the stressful work throughout the day. Moreover, I think that Sylvia stands in the field as a recording engineer who is there to translate the musician’s vision, spark creativity, help them perform better, and navigate them through the potential obstacles of a recording session. Her methods have her ‘imprint’ on the sound of a recording, but more importantly, affect the raw energy of the whole session in the best of ways. Definitely, an inspiring position to hold on to at the stage of the industry we are in right now. It was undoubtedly an eye-opening experience for me, and I believe for whoever was present during the day, as many very crucial topics were addressed thoroughly. Communication is vital, check your ego at the door, focus on the music. Will treasure this day and definitely look back to the tools and skills I got from that masterclass in the future!

Thank you Giorgos! And thank you Sylvia Massy! 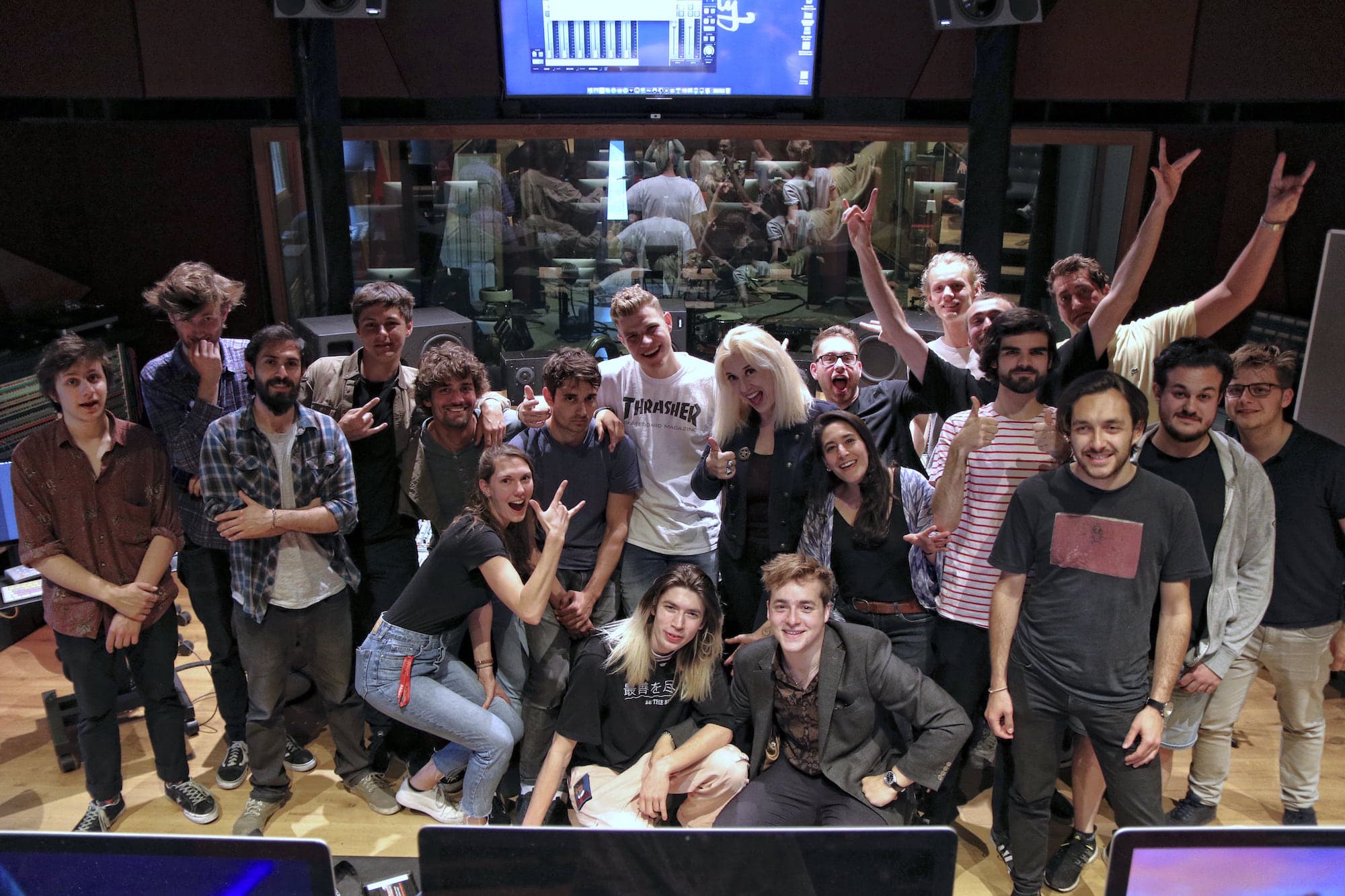